What are you looking for?

With Valentine’s Day just around the corner, Romance at Random (Random House) are kicking off the month with a historical romance giveaway pack for those that follow my blog. ONE winner will receive a copy of each of these THREE romance ebooks:

The Devil’s Thief by Samantha Kane 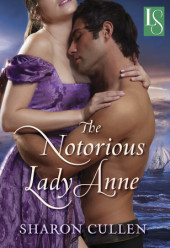 Nicholas Addison, celebrated captain of the Blackwell Shipping Fleet, has agreed to take Mrs. Emmaline Sutherland aboard the Pride and ferry the raven-haired beauty across the Atlantic on what he imagines will be a routine trip. But when the ship is attacked by pirates, the seemingly innocent passenger is revealed to be none other than the infamous marauder Lady Anne, whose name strikes fear in the hearts of sailors everywhere—and whose seductive wiles commandeers Nicholas’s affections.

Lady Anne, a legend of the high seas, has spent the last eleven years plotting revenge against her father, the owner of Blackwell Shipping. She’s targeted the Pride in hopes of plundering its captain’s company secrets. But beneath her fierce courage and bitter determination, Anne has the delicate heart of a woman—a heart that cannot help falling for Nicholas. Now Anne must make a difficult choice: bring down Blackwell or surrender to love. 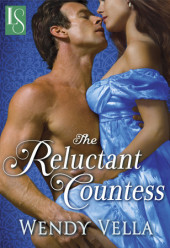 Regal, poised, and elegant, Sophie, Countess of Monmouth, is everything that a highborn lady should be. But Sophie is hiding a past that is far from royal. When Patrick, Earl of Coulter, realizes that her story doesn’t add up, he resolves to find out the truth of what Sophie and her sister-in-law are concealing. Although Sophie has every reason to avoid him, the handsome and charismatic Patrick awakens something wicked deep within her soul . . . a powerful need that Sophie must stifle in order to protect her place in society.

Despite Sophie’s humble background, the raven-haired beauty has won Patrick’s heart. But what Sophie needs now is an ally. Viscount Myles Dumbly, the disgruntled former heir of Monmouth, is determined to expose Sophie as a fraud to recapture his lost inheritance. Soon Patrick is drawn into a fight for both their lives. Somehow he must find a way not only to rescue Sophie from poverty once and for all, but to keep her in his arms forever. 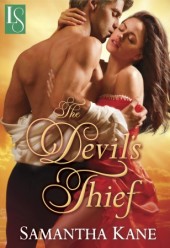 The daughter of a reformed jewel thief, Julianna Harte knows a thing or two about stealth. When the foundling home she provides for finds itself in dire financial straits, Julianna is forced to do the unthinkable. In a bit of misguided Robin Hood derring-do, she slips through the window of a wealthy rake to search for a treasure she knows is there: an invaluable pearl. But when the towering and very naked occupant of the moonlit bedroom ambushes her with a bargain—a night in his bed in exchange for the pearl—Julianna doesn’t know if it’s masculine heat or sheer desperation that makes his terms so tempting.

Alasdair Sharpe had no intention of keeping his end of the bargain. Planning to offer his little cat burglar carte blanche instead, he promptly loses himself in the delights of unexpected pleasure. But when he awakes the next morning to find his family heirloom gone, fury quickly replaces sensual languor. Of course, Alasdair is more than willing to use seduction to reclaim his stolen pearl—and find the key to Julianna’s heart.

This giveaway is international!

All you have to do is

Giveaway ends at midnight February 28th 2013 (Syd time) and the winner will be drawn via random.org

The winner’s details will be forwarded to the publisher who will give an eGift Certificate to their favourite eTailer.