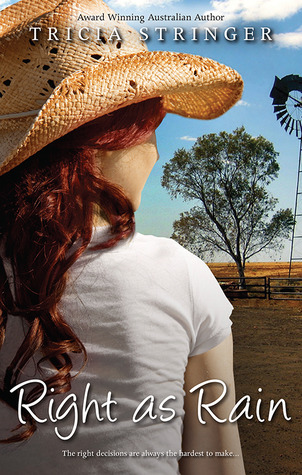 Right as Rain by Tricia Stringer

Synopsis- Mackenna Birch thinks she’s met the man of her dreams while on holiday in New Zealand. Adam Walker is funny, kind and loving but he walks out on her, or so she thinks…

Hiding from a broken heart, Mackenna returns to the family farm in Australia. Then, out of the blue Adam returns. He’s made the trip Down Under to visit his sick grandfather and to track down Mackenna.

When he turns up on her doorstep to profess his love and find out why she ran out on him, Mackenna finds herself questioning his love for her…

Review- Right as Rain is Tricia Stringer’s second novel, coming off the back of her popular Ruby Award Winner romance, Queen of the Road (which I absolutely loved).

In this story, we meet Mackenna Birch who awakens to find her holiday fling, Adam Walker, riding off into the sunset, leaving her confused and alone in her hotel in New Zealand. Feeling despondent, Mackenna returns home early to Australia to her family farm, only to find that there’s been a lot of change in the past six weeks since she’s been gone. Her city slicker brother has moved back home making a claim on the farm, he’s acting secretive, her father is recovering from a heart attack and there’s a new bloke working on the farm that Mackenna isn’t sure she can trust.

Mackenna’s dream has always been to run the family farm and to incorporate her chef background into creating an innovative exclusive restaurant style service on the property that showcases her meat products that they produce on the land. But Mackenna’s in a bit of a mess when it comes to the men in her life. Her best mate Hugh kisses her, the new workman Cam seems to be  putting the moves on her and then Adam Walker turns up at her family farm claiming he never intended their holiday romance to be just a fling… he wants more.

I really liked Mackenna, she’s a strong and determined young woman but when it comes to men I felt just as confused as her in Right as Rain. As a rural romance I must admit, I found the romance storyline a little messy. There were three guys introduced and I didn’t actually feel a connection with any of them in the beginning. Both Adam and Hugh have POV scenes which made it confusing for me as a reader to know who I was supposed to connect with. Hugh’s POV tends to dominate over any of the other men in the novel; however he doesn’t take on the hero role in this love story- that just didn’t make sense to me. To be honest I felt a little suspicious of each of these three men, and so the romantic path Mackenna does take just didn’t feel realistic, nor was the romantic development very strong in this story.

I did really enjoy the secondary story of Mackenna’s brother Patrick and the growth he undertakes in the novel. There were times I really felt sorry for the way he is treated by the family but I liked how he stood up for what he wanted in the end.

I really wanted to like this story more than I did, because I loved Stringer’s last novel, but unfortunately Right as Rain didn’t quite live up to my expectations. It certainly won’t turn me off picking up another Stringer novel in the future though.