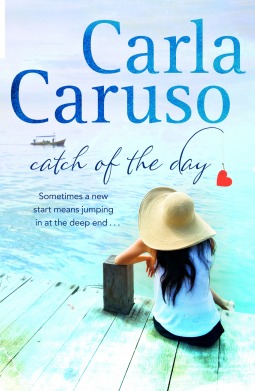 Catch of the Day by Carla Caruso

Synopsis- After a regrettable incident at the office Christmas party, up-and-coming fashion editor, Winnie Cherry, is banished to coastal South Australia to set up a beach lifestyle magazine – 300km from nowhere.

Her friends joke that she’ll marry a rich cray fisherman and stay there for good, but Winnie has other ideas. Determined to get back to Sydney within two months, she gets to work and starts counting down the days. Until she meets handsome freelance photographer Alex Bass, and sparks begin to fly.

As Winnie is increasingly drawn into the close-knit local community, she starts to question whether city life is really what she wants. That is, until Alex drops a bombshell that casts dark storm clouds over all her coastal dreams…

Review-  Catch of the Day by Carla Caruso is a fun Aussie romance set in fictional coastal town in South Australia. Winnie Cherry is ‘banished’ to coastal South Australia to start up a lifestyle magazine after a drunken mishap at an office Christmas party.

Coastal SA isn’t quite the road Winnie intended to take when she began working her way up the magazine ladder. But now she plans to make  her debut magazine shine so that she can snap up a more glamorous, city-based position once her (self-imposed) two month position has elapsed.

Unfortunately for Winnie, she doesn’t count on making good friends, being enlisted in the local netball team or falling in love with the local cray fisherman and freelance photographer Alex Bass. It’s not long before Winnie is weighing up her priorities and wondering whether the sophisticated city lifestyle she once strived to find a place in is really what she wants in life after all.

Winnie is a likeable character who gets a bit of a culture shock when she lands in coastal SA. It sounds like such a beautiful place and since I have a soft spot for South Australia, the setting in which the story is placed made me really want to check out the coastal towns of SA myself! Anyway, Winnie and Alex have great chemistry. They have one of those love/ hate relationships from the outset and both are in denial about their feelings for a majority of the story. However, this does allow them to develop a close bond and friendship and give them both the opportunity to explore what a more intimate relationship would entail.

There’s plenty of small-town drama, secrets and misunderstandings and a bucket load of chemistry to make Catch of the Day a must-read romance for Aussie romance fans. I’m thrilled to have discovered another great Aussie romance author and I intend to check out her backlist.

I also have to say that I love how Destiny Romance has taken a few of their titles to print… they look great and I read this book a lot faster because it was in print.