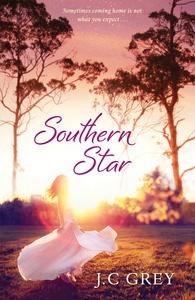 Synopsis- Will running from fame only lead her into danger?

Her reputation and career in tatters, Hollywood siren Blaze Gillespie escapes the scandal by fleeing to the Queensland property she still calls home.

Sweet Springs has been deserted for years and Blaze focuses all her energy on restoring the run-down homestead. Faced with hostile locals who have never forgiven her for flitting off to Hollywood, Blaze turns to her neighbour, handsome cattle farmer, Macauley Black, for help.

As Sweet Springs returns to its former glory, Blaze and Mac can’t resist their growing attraction. But when Blaze becomes the target of some serious threats, it looks like trouble has followed her home to Sweet Springs.

Review-  Southern Star by J.C Grey is a romantic mystery predominately set in outback Queensland, though does share a glimpse of Hollywood too.

Blaze Gillespie is a Hollywood star who flees to Queensland as boyfriend’s murder has created a big scandal and her reputation is in tatters. She returns home to QLD to her family’s rundown property of Sweet Springs. She’s greeted at the airport by the surly Macauley Black who also turns out to be her cattle-farmer neighbour.

Blaze is suspicious of those around her, there’s more scandalising information breaking the front page newspaper even in outback QLD as her reputation seems to follow her like a bad smell. A smell she just can’t seem to shake. But when Macauley Black who doesn’t give a damn about her Hollywood rendezvous and glitzy lifestyle shows an interest in her, Blaze is tempted beyond her self-control.

In between renovating the homestead and trying to make up her mind whether she loves or hates Macauley, there’s also danger lurking in the background for Blaze. Trouble has followed her from the US, locals are being targeted and all roads lead back to Blaze.

I enjoyed the mystery and the stark contrast between the life Blaze leaves behind compared to the one she sinks her feet into in outback QLD. Blaze and Macauley have great chemistry and I liked the protective, solid stance that he takes in her life. Even if he is a bit of a Neanderthal! My only criticism about the romance is that I felt they acted on their sexual tension quite quickly, at a point where it didn’t feel very believable that they would take that next step. And since the rest of the story builds on this sexual relationship they begin, I found the depths of their feelings for each other hard to believe- especially given their backgrounds of not trusting the opposite sex.

Southern Star was a very entertaining read. I loved the setting, the chemistry between the hero and heroine was sizzling and the suspense just added that element of danger. Well worth the read