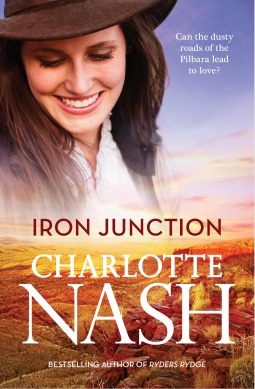 Synopsis- Desperate to get away from her family’s expectations of success in love and in work, Dr Beth Harding leaves Sydney behind and takes a locum job at Iron Junction – a mining town in the distant Pilbara. With the mine growing at a rapid pace, the town full of contractors and tensions running high, Beth is convinced she’s made a huge mistake until she meets Will, a man who shares her dreams and could make the difference between going home and staying on.

For Will Walker, being born into cattle farming was never the life he wanted. He’s traded a broad-brim for a hard hat and headed down the mines. Iron Junction seems like just another gig in the long road that’s taking him even further from home. But in the lonely fly-in, fly-out life, he never counted on meeting Beth …

But when Beth and Will discover that the choices they make will have far-reaching consequences neither could ever have imagined, they have a decision to make. Will they be brave enough to risk loving each other despite everything that stands in their way?

Review- Iron Junction is rural fiction author Charlotte Nash’s second novel, one that’s release was much anticipated by me. I loved Ryders Ridge and was happy to see the loose link to some of its characters in Iron Junction.

Again, the protagonist is a doctor, but the challenges are much different! Dr Beth Harding leaves Sydney in a hurry to take up a temporary job in a Western Australian mining town called Iron Junction. She’s uncertain about her decision to leave her fiancé and break away from her family’s expectations but the chance to get away and try something new was too enticing. The position she takes on presents many challenges but is also quite rewarding for Beth who tries to find her feet in a town populated by contract miners.

When Will Walker saves the day after a car breakdown, Beth discovers that there’s even more to love about Iron Junction than just her job. They develop an easy, open and trusting friendship that occasionally crosses into new territory. However, Beth is pretty clear that she only wants to be friends as she’s still trying to sort through the mess she left behind in Sydney. Will develops strong feelings for Beth but he too is happy to not get into anything serious because he has some troubles from his past hanging over his head that he does want her getting caught up in.

Will and Beth are very likeable characters and I was completely engrossed in any scene they were together as Nash really has a way of creating a strong thread of intimacy between her characters without rushing the romance. I loved this aspect of the story as it made their connection so much more realistic and the resolution of the story was believable. I really loved the pace of Iron Junction, the slow build-up of Beth and Will’s friendship until a whirlwind of challenges and decisions to be made near the end of the novel. I devoured this novel in a couple of sittings and I continued to think about these characters when I wasn’t reading their story.

What I also liked about this story was how Nash resolved the problems between Beth and her family. Some dysfunctional families just don’t have that happily-ever-after where everyone gets along and has a close bond. For Beth, she discovered that she couldn’t change anyone else, but she could make a choice about whether she allowed others’ negativity to impact on her and whether she continued contact with people who didn’t really take the time to get to know the real her. Good on her for making a brave choice to break free and choose something different for herself.

The only reason I didn’t rate this novel a 5/5 was because I felt that Will’s big secret was a bit of a letdown and was resolved rather quickly. This meant that the conflict he experienced about his relationship with Beth wasn’t quite as believable as it could’ve been. I highly recommend both of Nash’s novels for anyone who enjoys rural fiction.