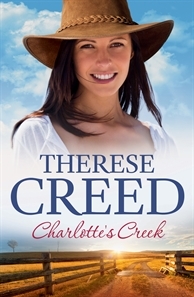 Synopsis- After a couple of years working in a privileged private school, Lucy Francis yearns for adventure. So when she hears about a job teaching four children on a massive cattle property in North Queensland, she decides to throw caution – and her teaching job – to the winds.

When Lucy arrives at Charlotte’s Creek Station she finds a family in crisis. To make matters worse, the four children she’s been charged with educating are very spirited, not always cooperative, and dismally behind in their schooling.

To Lucy, the only person who seems to be keeping Charlotte’s Creek afloat is the family’s gruff stockman, Ted. With his support and encouragement Lucy throws herself into the day-to-day activities of the station and makes excellent progress with the children.

Though Lucy and Ted’s feelings for each other grow, Ted can’t see any future for them because of his lack of prospects. As the family divisions at Charlotte’s Creek prove insurmountable and the property looks set to be put on the market, Lucy faces returning to the city and leaving Ted behind. . .

By the betselling author of Redstone Station, this is the story of a strong young woman stepping into the unknown, trying to make things work, and finding love.

Review- The second novel by Aussie author Therese Creed, Charlotte’s Creek is another rural story about a strong young woman in rural Australia. While I wasn’t blown away by Creed’s first novel Redstone Station, I was completely absorbed in the story of Charlotte’s Creek. A combination of interesting characters, genuine outback community ties and a love of the land that made it difficult for me to put this book down.

Lucy Francis (presumably in her mid 20’s) throws in her teaching position at a posh Sydney private school to take up a governess job in North Queensland. She leaves behind the life (her parents) expected of her and takes the plunge to be out of her comfort zone- and that she is. She arrives at the dusty homestead and meets her four wild students, quickly discovering why the family had so many failed governesses before her. Admirably, Lucy takes it all in her stride. She’s young, determined and hopeful and she has a vision of how she wants to run her small school. Of course there’s a lot of reluctance from her academically- behind students who would much rather be out on the cattle farm with their dad.

Lucy’s initial isolation and loneliness is paramount and I admired how she embraced this aspect of her new life. in this acceptance she makes unlikely friends with the children’s foul-mouthed mother Mel and the broody stockman Ted. I particularly enjoyed the quiet companionship between Ted and Lucy. Typically a near-mute hero would irritate me beyond tears, but in Charlotte’s Creek it was his presence, his actions and what he didn’t say that showed me the kind of bloke Ted was. His backstory, though revealed quite late in the story, was realistic in the context of his past experiences and the solitary lifestyle he lived.

What I particularly enjoyed about this story wasn’t actually the love story. It was Lucy’s exploration of the property, her eagerness to learn the runnings of the cattle farm and her curiosity about the history of the land. Perhaps that’s what I connected with the most. My recent move to a semi-rural location has unearthed a much-needed serenity and a sense of accomplishment at even the simplest tasks undergone around our property. In that sense I could really relate to the way she handled the situation.

In my opinion Lucy was a more well-rounded character than Creed’s protagonist in Redstone Station. Perhaps it’s the author’s own personal experience that shines through in this story- a former school teacher who now runs a cattle station with her husband and four (soon to be five) children.

I’m looking forward to seeing where Creed’s writing muse takes her next.