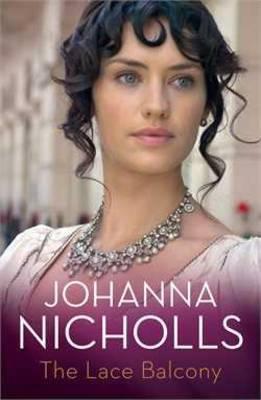 The Lace Balcony by Johanna Nicholls

Synopsis- Vianna Francis, known in the colony as ‘The Sydney Venus’, is a notorious young mistress in keeping to a former gentleman convict, who uses her to entice wealthy men to his gaming tables. A woman of mystery, Vianna is a magnet for scandal.

Was she the mistress of a Royal duke? A lady’s maid who learned the tricks of the world’s oldest profession when in service to a Parisian courtesan? Or the widow of a young man executed on the gallows?

Men of high rank are determined to possess this passionate, mercenary beauty. The L’Estrange half-brothers were born only months apart. One brother is an idealistic dreamer, the other a volatile adventurer. And the rivals have two things in common – a fatal attraction to get-rich schemes that run afoul of the law – and their obsession with Vianna.

Review- The Lace Balcony is the third Australian historical fiction novel with romantic elements to be released by Johanna Nicholls. I completely devoured her first two novels (Ghost Gum Valley & Ironbark) as early Australian fiction is quite rare to stumble across by modern day writers. So when I learned of this book’s release, I was really excited to read it.

Set in the late 1820’s, The Lace Balcony tells the story of Fanny Byron who arrives in Sydney with her 2 year old sister Daisy with no money or job. She’s vulnerable in a new country and needs an income to survive. A gentleman named Severin takes her under his wing and uses young Daisy as the motivating force behind Fanny making her fortune as the renowned Vianna Francis who makes a reputation for herself as the Sydney Town Venus. A courtesan who is ‘protected’ by Severin but performs as a singer/ entertainer luring in men to his gambling business.  When the money runs low, he manipulates Vianna into a contract to perform 7 night’s straight; each night she is to choose a man to dine with and at the end of the week, she chooses the highest bidder to keep her as their mistress for one year in the hope of settling debts and ensuring young Daisy’s needs are met.

While her relationship with Severin is quite toxic; he is controlling and abusive; though she does develop affection for him and of course her survival is heavily dependent on his keeping. However, she is propelled forward knowing that she has experienced one fleeting moment with a young felon by the name of Will whom, on a whim, she kissed as his last request before he was executed. It is some time before she discovers that Will is actually Mungo Quayle and he wants to take her as his wife. In the midst of all this Mungo Quayle’s half-brother Felix L’Estrange is bidding on Severin’s gambling contract to win her as his mistress.

The Lace Balcony is told from the perspective of Fanny (a.k.a Vianna), Felix and Mungo as they each make choices that bring them together and inevitably drive them apart. It’s fair to say this story is quite lengthy at over 500 pages long and to be honest, it was well over the 100 page mark when it finally drew me in and kick started that desire to want to find out more. Up until that point it was a slow start and I was uncertain about where this story was heading.

While I enjoyed the plot twists and Mungo’s enthusiasm and passion invested in gaining Fanny’s trust and affections, I experienced mixed feelings about Fanny herself. As a reader I felt quite frustrated by her at times. I could completely understand her vulnerability and how a vulnerable woman can end up in an abusive relationship- especially during that time period… but it was frustrating to see Fanny, at times, play the martyr and have the belief that she deserved that life. Sometimes she was brave and stood up for herself and other times she was passive and helpless. Unfortunately her motivation to look after Daisy just didn’t feel that believable. Especially since any interaction with Daisy shared with the reader was quite minimal at the beginning of the story and then we don’t see her again after that… so Fanny’s connection and protectiveness of Daisy wasn’t instilled at the outset so her desire to continue choosing a life as a courtesan was even more frustrating because it was apparently all for this step-sister. As a reader I tended to like and relate to Mungo more than anyone else in the novel, so at least I could root for him to achieve his desires at the end of the story.

It probably sounds like I didn’t enjoy this story, but I actually did. I like the plot, I love the setting and era and I also enjoyed the varied secondary characters, but I really struggled to relate and empathise with Fanny (a.k.a Vianna) which did impact on my experience as a reader.