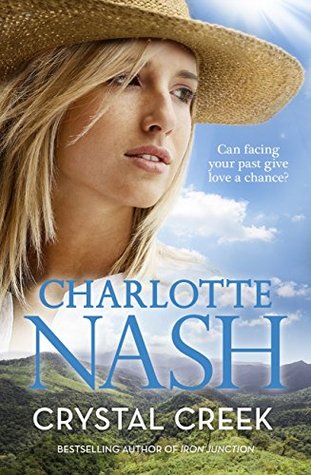 Synopsis- Medical student Christina Price has worked hard to rise above an upbringing filled with neglect and the assumption that she would never amount to anything. She promised herself she was never going back to Townsville. But when a twist of fate lands her in a Townsville army base clinic, she must confront past hurts if she wants to succeed and, just maybe, find love.

Captain Aiden Bell is used to the hard life of an army officer. But his career has taken an emotional toll that he hasn’t dealt with until meeting Christina stirs memories, desire – and hope.

Review- I have fast become a big Charlotte Nash fan. Crystal Creek is the third loosely linked medical rural romance novel released by this clever Australian author. In Crystal Creek, we are introduced to Captain Aiden Bell who is the brother of Dr Daniella Bell who had the leading role in Nash’s debut novel Ryder’s Ridge. He’s posted at the Army base in Townsville nearby the Hospital where Daniella is also posted; it’s the closest the two have been in proximity for work/ living in many years.

Aiden’s a devout captain, with his career taking priority over lifestyle and love since his fiance left him while on deployment and wiped out his savings and assets. Until he meets quiet and studious medical student Christina Price who arrives at the army base GP clinic on rotation. Despite the 7 year age gap, their transient lifestyles and the fact that they’ll both be out of Townsville on different postings in less than two months; Aiden finds himself drawn to Christina and unable to fight the attraction.

Christina Price has had a tough life; her childhood unstable, her mother an alcoholic and Christina was forced to grow up far quicker than her peers. Her first experience of stability when living part-time with her maternal Aunt was cut short quickly without a clear explanation and then she was left to fend for herself and look after her dysfunctional mother. One chance encounter with a kind school nurse, was all the determined Christina needed to decide she wanted to get into medicine and she would work her butt off to get there. There was no way she’d end up an emotional mess like her mother. When her mother was accepted into a care facility, Christina could finally focus on her studies, earn a living through casual jobs and live independently. Her determination to survive was sometimes at the expense of forming friendships or having a social life. So when she turns up at the Townsville Army Base to start her placement her studious, work and study-focused life is challenged by the pull of friendly and lively locals like her peer Katie, her mentor Travers and his best mate Aiden.

Initially confused by Aiden’s interest and low in confidence, it’s not long before she can’t resist his charms and his quiet, solid presence. It’s a scary leap of faith to trust someone, to depend on them but she takes the risk and their friendship deepens into a passionate romance. With deadlines looming, Christina and Aiden must reconsider their priorities and figure out whether their relationship is worth pursuing beyond time and distance.

What can I say? I loved this book. Aiden’s a wonderful, strong and intelligent character which is also true for Christina. While reading the story, I picked up on a lot of anxiety that filtered through from Christina’s character which sometimes (in other stories) can be a bit repetitive and annoying, but she was so well set up as a character that it was completely understandable and I enjoyed seeing her grow in confidence and in her emotional connections. Nash has a wonderful way of weaving small town character with interesting medical dramas and slow-building romance all into the one book. Highly recommend this author and can’t wait to read the next one!