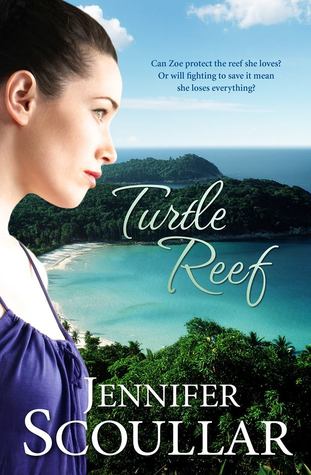 Synopsis- Unlucky-in-love zoologist Zoe King has given up on men. Moving from Sydney to take up an exciting new role in marine science in the small sugar town of Kiawa is a welcome fresh start. Zoe is immediately charmed by the region’s beauty – by its rivers and rainforests, and by its vast cane fields, sweeping from the foothills down to the rocky coral coast. And also by its people – its farmers and fishermen, unhurried and down to earth, proud of their traditions.

Her work at the Reef Centre provides all the passion she needs and Zoe finds a friend in Bridget, the centre’s director. The last thing she wants is to fall for her boss’s boyfriend, cane king Quinn Cooper, so she refuses to acknowledge the attraction between them – even to herself. But things aren’t quite adding up at the Reef Centre and when animals on the reef begin to sicken and die, Zoe’s personal and professional worlds collide. She faces a terrible choice. Will protecting the reef mean betraying the man she loves?

Review- Turtle Reef is the fourth romance novel set in a small Australian community by Jennifer Scoullar. In Turtle Reef, we are introduced to an entirely new cast of characters in a very unique setting. Zoe King is a zoology graduate awaiting her chance to get her foot in the door of her chosen career. Living in Sydney with limited access to wildlife, Zoe is keen to put all this theory into practice. When she’s offered a position at the Reef Centre in small town Kiawa, known for its sugar cane and sea wildlife she doesn’t hesitate the slightest.

She’s pleased to be appointed alongside the Reef Centre’s Director Bridget with an impressive list of qualifications and achievements and her team. From dolphin training to observing the turtle reproductive cycle to training octopus to studying the ocean sustainability, there’s plenty to keep Zoe’s passion alive. But things don’t always run smoothly. First, there’s no car as promised in her contract and no independent accommodation. Instead, she’s offered a room at Bridget’s fiancé’s property. The problem is, Zoe has an undeniable attraction to Quinn that makes life a little awkward. Zoe also begins to question just how perfect and productive her charismatic boss Bridget really is.

I have to be honest; I was disappointed with this story. I’ve read two of Scoullar’s former titles Brumby’s Run and Currawong Creek and really enjoyed them, but Turtle Reef just didn’t live up to my expectations. From the outset, it didn’t feel like the arc of the story was clear. She turned up at Turtle Reef to work and I thought there’d be quite a focus on Zoe finding her feet at a professional but there was a lot of interpersonal dramas that got in the way of this growth. For much of the story I felt Zoe was a narrator, relaying the lives of Bridget, Quinn, his brother Josh and also Leo. Even though Zoe was an outgoing and direct personality, as a reader I often lost her on the page. The romance storyline was a little confusing because she’s attracted to Quinn who is clearly head over heels and engaged to Bridget but then Zoe starts to spend time with Leo (Bridget’s father!). Occasionally Quinn’s POV was added into the mix which shed light on the imperfections in his relationship with Bridget. Perhaps I was a little challenged ethically, because Zoe and Quinn developed feelings for each other while he was in a relationship with someone else- no matter how nutty she was.  As for Bridget’s gradual decline in her state of mind throughout the story, this wasn’t clearly explained and her motivation at times was weak.

*spoiler alert* I also found it strange that Bridget was sent off to a psychiatric institution without there being any clear understanding of her mental state. There were a few holes in the plot that didn’t make sense to me (and as a psychologist I can’t help but question them!!). *end*

While there were a lot of things I didn’t like about the story, there are some definite strengths. I liked Zoe as a character, I just wish she was developed further and showed some growth. I was interested in the role that Josh plays in the lives of Zoe and Quinn and thought he added a great dynamic to the story. I especially loved the setting; it’s a unique Australian setting with such fascinating wildlife. I’d have liked to see more of this.

Overall, Turtle Reef wasn’t quite what I hoped, but I did find it to be a quick and easy read. Based on her previous novels, I’d still be interested in reading anything else released by Scoullar in the future.