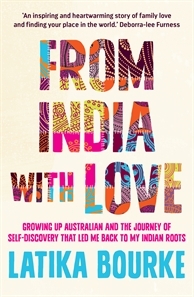 From India With Love by Latika Bourke

Synopsis- Latika Bourke was adopted from India, aged eight months. Growing up in Bathurst, New South Wales she felt a deep connection to her Australian home and her Australian family.

It wasn’t until she heard her name uttered in the hit movie Slumdog Millionaire that Latika recognised she knew nothing of her Indian roots, the world she was born into and what she could have become had she not been brought to Australia as a baby.

As Latika carved out a successful career for herself as an award-winning political journalist, she became more and more curious about her heritage and what it meant to be born in India and raised in Australia. And so began a deeply personal and sometimes confronting journey back to her birthplace to unravel the mysteries of her heritage.

From India with Love is a beautiful story of finding your place in the world and finding peace with the path that led you there.

Review- From India with Love is a remarkable memoir by Latika Bourke, a woman born in India and adopted by an Australian family as an infant. Latika’s insight into her early years and pre-adoption was quite fascinating. Her parents were keen to raise a large family but when their second biological child was diagnosed with cystic fibrosis they turned their attention to adoptions. After two failed inter-country adoption attempts they successfully adopted Rani and then Damien from India before Latika also joined their family. Her adoptive parents went on to have another 3 biological children and so they ended up with 8 children!

Latika speaks quite positively of her adoption experience; she wholeheartedly identified as a proud Australian and actively rejected any elements of her Indian roots. It was actually quite refreshing to hear about an adoption that has had positive outcomes, but it was obvious that Latika had some definite defences when it came to anything to do with India. I’ve visited (and loved) India, I adore the food and have an obsession for Indian literature and Bollywood movies and I couldn’t help but wonder why on earth Latika would reject her Indian roots!

As the story of her life progresses, it’s revealed that a reluctant sitting of watching the Slumdog Millionaire movie was her wake up call. For the first time she allowed herself to think about what her life could have been like if she hadn’t been adopted. Her curiosity was sparked by this movie and she began to consider visiting the country of her birth. It was a couple more years before she made the big leap and booked a trip to northern India with her partner Graham. India had a strong impact on her; it was confronting and invigorating and it seems that the missing parts of her identity fell into place. Her experience of returning to the orphanage where she spent the first few months of her life was particularly touching.

As an adult, Latika has carved a successful career in journalism and undoubtedly her newfound passion for her country of birth will evolve through her influential role in the media. From India with Love is a light-hearted, easy read with a likeable character who challenges her own defenses and steps out of her comfort zone to resolve the only aspect of her adoption she was uncomfortable with; the elements of her Indian identity. A great read.