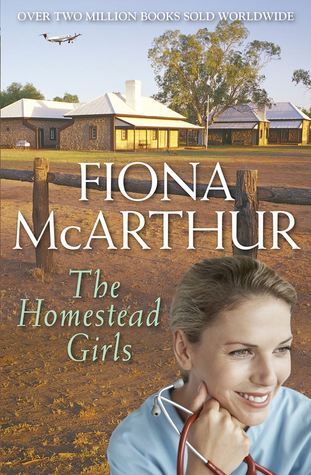 The Homestead Girls by Fiona McArthur

Synopsis- After her teenage daughter Mia falls in with the wrong crowd, Dr Billie Green decides it’s time to leave the city and return home to far western NSW. When an opportunity to pursue her childhood dream of joining the Flying Doctor Service comes along, she jumps at the chance. Flight nurse Daphne Prince – who is thrilled to have another woman join the otherwise male crew – and their handsome new boss, Morgan Blake, instantly make her feel welcome.

Just out of town, drought-stricken grazier Soretta Byrnes has been struggling to make ends meet and in desperation has opened her station house to boarders. Tempted by its faded splendour and beautiful outback setting, Billie, Mia and Daphne decide to move in and the four of them are soon joined by eccentric eighty-year-old Lorna Lamerton.

The unlikely housemates are cautious at first, but soon they are offering each other frank advice and staunch support as they tackle medical emergencies, romantic adventures and the challenges of growing up and getting older. But when one of their lives is threatened, the strong friendship they have forged will face the ultimate test . . .

Review- The Homestead Girls is the second novel by Australian author and midwife Fiona McArthur. It follows the lives of three women in the fictitious town of Mica Ridge.

Billie hopes for a new start with her teenage daughter Mia when they relocate to her childhood hometown and she takes up a position with the Royal Flying Doctor Service (FDS). They move onto the property owned by Daphne, a generous nurse on the FDS team.

Soon, the three women move onto large working farm run by Soretta, a strong young woman whose struggling to make ends meet when her grandfather is admitted to Hospital. It’s not long before word gets out about town that these single women are forming a close bond and supporting each other. Lornetta, an older woman, joins them for a little adventure as she fears she’s losing her mind. The women find a way to work through their fears and find hope in the future. Even young Mia does a complete turnaround with some guidance and her new hobby looking after the animals on the farm.

I didn’t really get into the novel until halfway through as there were a number of characters and viewpoints to familiarise myself with and it made it difficult to really connect with a single character until they were more developed. There’s a couple of romantic subplots in the story as well, though I didn’t really warm to Morgan who was Billie’s love interest. There was some chemistry, but I felt their interactions were a little stilted. Quite a contrast to the relaxed, romantic nature of the relationship that develops between Daphne and her co-pilot Rex. I think I’d have enjoyed this novel more if the characters were better fleshed out which could have been achieved with it being a longer novel (it’s only 286 pages), or sticking to the viewpoint of 1-2 characters. Overall it was an easy and quick read and the FDS influence on the story was particularly fascinating and the most engaging element of the story for me.

Please stop back by tomorrow to read the guest post by Fiona about the influence of her midwifery background on her storytelling.