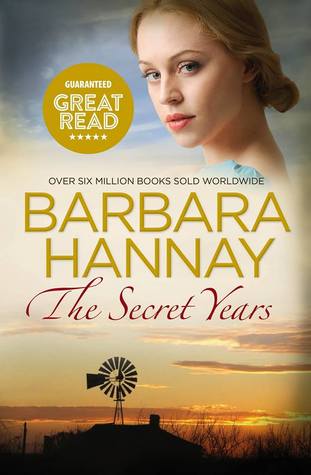 The Secret Years by Barbara Hannay

Synopsis- When Lucy Hunter stumbles upon her grandfather Harry’s World War II memorabilia, she finds a faded photograph of a stunning young woman known simply as ‘George’ and a series of heartfelt letters. They are clues about the secret years, a period of Lucy’s family history that has been kept a mystery . . . until now.

How did a cattleman from north Queensland find forbidden love with the Honourable Georgina Lenton of London and persuade her to move to his isolated outback property? And why are the effects of this encounter still reverberating in the lives of Lucy and her mother, Rose, now?

As the passions of the past trickle down the years, three generations of one family pull together. Each must learn in their own way how true love can conquer the greatest challenges of all.

From the wild beauty of the Australian bush to England’s rugged south coast, this is a deeply moving story of heartbreak, heroism and homecoming by a beloved, multi-award-winning author.

Review- This is the first Hannay novel I’ve read that doesn’t fit neatly into the ‘romance’ genre and I really enjoyed it. The Secret Years is set across two eras; World War II and then modern-day Australia, and spans three generations of secrets, romance and heartbreak.

In 1939, George Lenton  (aka the Honourable Georgina Lenton of London) joins the Army Service Corps in England and falls in love with an Australian soldier who lives on a north Queensland cattle farm. From England to New Guinea to Australia, their romance is complicated, dangerous and thrilling.

In modern-day Australia Lucy Hunter has just arrived home from a deployment to Afghanistan and intends to set a wedding date with her fiance Sam. Her first day back on home soil doesn’t quite go to plan and she finds herself no longer engaged and setting off to England to trace her family history. With only a few letters and her grandfather Harry’s medals to go off, she hopes to unearth the tension between her mother Rose and Harry and the secrets that undermine the family’s connectedness.

I felt some trepidation when I began this book as I felt that Lucy’s voice felt a little ‘old world’ and not quite congruent with a young woman in modern-day Australia who worked for the Army (though I was trying not to be influenced by stereotypes!). But I did really warm to her and it wasn’t until she heads off to England (and in parallel George goes to New Guinea) did I become completely engrossed in the story. The suspense picked up, the gaps began to be filled and the romance stepped up. I struggled to put this book down and when I did, the characters remained on my mind. It’s one of the few books I’ve read that sweeps across to eras where I’ve felt emotionally invested in all the characters rather than just aligning myself with one.

I’d highly recommend this one!