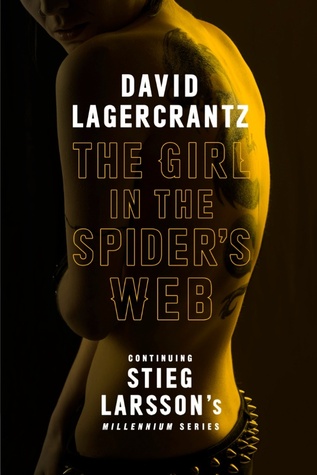 The Girl in the Spider’s Web by David Lagercrantz

Synopsis- She is the girl with the dragon tattoo. Lisbeth Salander. An uncompromising misfit whose burning sense of injustice and talent for investigation will never respect boundaries of state or status.

He is a campaigning journalist. Mikael Blomkvist. A lone wolf whose integrity and championing of the truth bring him time and again to the brink of unemployment – and prosecution.

The call comes in late at night: a superhacker has gained access to critical, top secret U.S. intelligence.

Blomkvist knows only one person who could crack the best security systems in the world. This case has all the hallmarks of Salander. She is accused of acting without reason, taking risks just because she can, but though they have lost touch, Blomkvist knows Lisbeth better than that.

There must be something deeper at the heart of this – maybe even the scoop that Millennium magazine so desperately needs for its survival.

A tangled web of truth that someone is prepared to kill to protect . . .

Review- This review is well overdue as I read this book back in early September just before the birth of my daughter. I’ll be claiming ‘baby brain’ for the reason this review will be so short and sweet!

First I’ll start by saying, like many Larsson fans I was a little wary of the Millenium series continuation with a new author. Thankfully, I really liked Lagercrantz’s writing style and I feel he did do the characters justice without trying to copy the original’s author’s style. There was also a lot less information dumping and tedious descriptions than the Millenium trilogy which was a big relief! I seriously don’t care how long Lisbeth takes in the shower or what she buys at the supermarket!

The Girl in the Spider’s Web is very technology and computer focused which to be honest went over my head at times, despite the great detail included to explain to the lay reader. Regardless, it allowed Lisbeth’s true talents to shine; hacking! I won’t go into the plot, because I don’t remember it all but there are a lot of characters who somehow all manage to be linked to the murder of the Swedish Professor. Blomkvist gets on the case and we see far more of him in this novel than Lisbeth, which didn’t bother me too much.

Admittedly, it did take a good 100 pages for me to really get into the story, but once I got going I was propelled forward to find out what would happen next. If more books are released in this series by Lagercrantz then I’d definitely pick up a copy!

1 thought on “Book Review: The Girl in the Spider’s Web by David Lagercrantz”