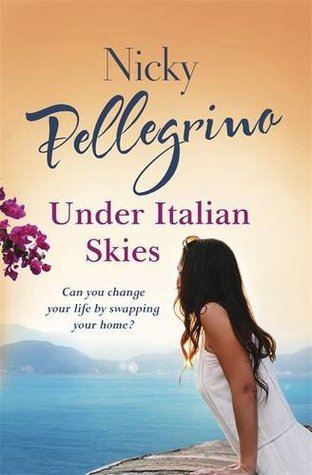 Under Italian Skies by Nicky Pellegrino

Synopsis- Stella has life under control – and that’s the way she likes it. For twenty-five years, she’s been trusted assistant to a legendary fashion designer, but after her boss dies suddenly, she’s left with nothing to do apart from clear the studio.

It seems as though the life she wanted has vanished. She is lost – until one day she finds a house swap website and sees a beautiful old villa in a southern Italian village. Could she really exchange her poky London flat for that?

But what was intended as just a break becomes much more, as Stella finds herself trying on a stranger’s life. As the villa begins to get under her skin, she can’t help but imagine the owner from the clues around her. She meets his friends, cooks the local food he recommends and follows suggestions to go to his favourite places. But can an idea of someone ever match up to the reality?

As Stella wonders if she can let go of the safety of her past, perhaps there’s a chance for her to find a way into her future…

Review- This novel was such a pleasant surprise. I was initially attracted to the setting (Italy) and the premise (house swap) but was a little wary after a few pages in when I realised the protaganist was in her late 40’s; almost two decades older than me. I wasn’t sure I could relate, but this was such a lovely, well written book with a fantastic cast of characters, that I was very quickly swept away and found it difficult to put the book down.

In Under Italian Skies, Stella is stuck in a rut. Her long-term employer has died as has her assistant job in fashion design. Stella hadn’t ever considered doing anything else, she was happy and content; comfortable. When her best friend Birdie suggests she place her little flat in Camden, London on a house swap website and take an ‘adult gap year’, Stella is hesitant but goes along with the plan. It’s not long before she’s swapping keys with the mysterious Leo, a landscape designer from Southern Italy and is packing up her life to venture into the unknown. She stays in Leo’s summer holiday home, Villa Rosa in Triento. It’s outside of tourist season in this small town and it’s not long before Stella befriends Francesca the local linen store assistant, Rafaella a widow who runs a restaurant in summer and the local celebrity Tosca; three women who, like Stella, are trying to redefine their identity and find their place in the world.

Though Stella’s character doesn’t jump out of the pages, I did feel connected to her. As the reader I wasn’t sure where the story would lead me, just as Stella was stepping into murky waters, unsure where her journey would lead her. The women in the story are all strong, opinionated and sometimes Stella became swept up in their dramas, but after some time it was clear that Stella was also the catalyst for each of the women to change their lives.

One of my favourite elements of the story, was the sub-plot friendship that develops between Stella and Leo via emails. We never see Leo’s POV but he is so alive from the emails and this is a great credit to the author for developing his character so well that the development of their relationships felt completely natural and realistic. I finished this book with a big smile on my face and even said aloud “that’s nice” because I just loved how some of the plot was left open-ended while others were tied up neatly. Highly recommend this book!