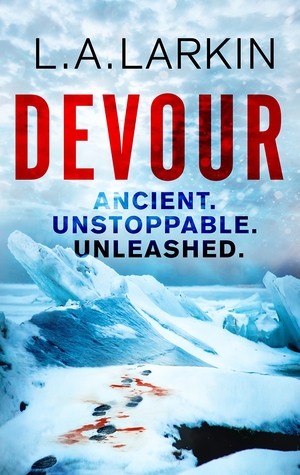 Synopsis- Their greatest fear was contaminating an ancient Antarctic lake, buried beneath the ice for millions of years. They little knew about the catastrophe they were about to unleash.
Welcome to the high octane world of Olivia Wolfe,
As an investigative journalist, Wolfe lives her life in constant peril. Hunted by numerous enemies who are seldom what they first seem, she must unravel a complex web of lies to uncover an even more terrifying truth.
From the poppy palaces of Afghanistan and Antarctica’s forbidding wind-swept ice sheets, to a top secret military base in the Nevada desert, Wolfe’s journey will ultimately lead her to a man who would obliterate civilisation. She must make an impossible choice: save a life – or prevent the death of millions.

Review- Devour is the third crime thriller novel written by Australian author LA Larkin and the first in her new Olivia Wolfe series. I enjoyed her last novel, Thirst which was set in Antartica and centred around Australian scientists and a murder mystery. But I absolutely loved Devour. LA Larkin has definitely stepped up the plotting, characterisation and suspense in her latest novel and I found it really hard to put down.

Olivia is an investigative journalist who escapes a near death experience in Afghanistan and returns to London with the creeping sensation that she has a stalker. She jumps at the chance to investigate a suspected murder in Antarctica and leaves right away, on request from her boss. Once again, Wolfe’s curiosity places her life at risk and it’s not long before the small team of scientists she has infiltrated start to point the finger at her when crucial assets go astray. Olivia discovers there’s a potential ‘mole’ in the team who is feeding information to a rival team of Russian scientists which places the English scientists’ discoveries at significant risk. She is drawn to an English scientist of Russian heritage and strives to uncover which side exactly he works for… before it’s too late.

Olivia is a likeable, tough and intelligent protagonist with enough emotional damage and mystery to make for an interesting series. Larkin has also set up an arc for the series with a number of plot elements that will likely carry through into later novels. I thought the romantic plot line also added an interesting dynamic to the story… It’s exactly the kind of crime series that I really enjoy!

From murders to biological warfare, Devour has plenty of action-packed drama, suspense and intrigue to keep a crime fiction fan turning the pages until the very end. Highly enjoyable read and I look forward to reading the next book in the Wolfe series!

Devour can be purchased from Fishpond and other leading book retailers